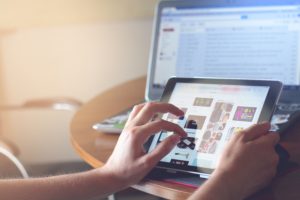 People are the essential factor in digitalization!

Studies, field reports and our own experiences prove it over and over: Whether and how quickly a digitalization project will be successful depends largely on how the people in the company are involved.

Transparent and proactive communication about upcoming changes is central to this. However, the opportunity to contribute ideas and time for reflection is also important for about half of the employees in office jobs.[1]

Changes resulting from digitalization actually only become a problem if employees do not feel sufficiently involved – and thus valued! Contrary to what is often quoted (but little evidenced), people are not against change as such. They just need to see its purpose and want to be able to help shape the new situation. And who is responsible for this? Correct:

The leader is the most important lever

According to the index, in 2018 poor managers cost the German economy up to 103 billion euros.[2] It is their behavior and the corporate culture it creates that determine how quickly companies adapt to change. So instead of focusing on employees, the more effective lever would be the management of a company through all its hierarchies. And it needs to be levered from the very top.

Digitalization is a question of mindset

The bestselling German author on the subject of digitalization Christoph Keese said in the podcast “Handelsblatt Disrupt” from February 14, 2020: “Digital success is a function of the will!” This means that in those companies where leadership really wants digitalization, it will be successful.

But to achieve this, managers must develop an attitude of openness and curiosity, of courage and genuine cooperation at eye level.

What is the best way to support them in this?